(This column includes corrected information from its earlier publication on construction of the ships.)

Fire was the ever-present fear for those who owned or worked in the scores of sawmills up and down the Saginaw River in the 19th century.

With thousands of machines and saw blades whirling and whining, any spark could ignite the tons of sawdust that accumulated in mountainous stacks. Some fires became major disasters as the one in 1892 that engulfed nearly 50 square blocks of the South End killing one resident and leaving hundreds of families homeless.

Each month, it seemed, fires big and small tasked the fire departments on both sides of the river to their limits, and it was with extreme bravery that the firemen were able to limit the damage and loss of life.

Besides the lumber industry, West Bay City, the community opposite its big brother on the east side of the river, was home to the largest shipbuilding operations in Michigan. Between the two major shipbuilders, Wheeler and Davidson, most of the best and larges Great Lakes ore and freight carriers plying the waters were constructed here.

Tons of lumber were needed to construct the ship’s superstructure and interior, from pilot house on down to the sub-decks and frame. Davidson’s yard produced some of the largest wooden ships ever built on the Great Lakes. 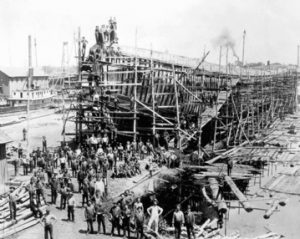 To plane and cut the lumber to size required a major supply of raw-cut wood, sawyers, and planing mill operators. So the possibility of fire also was a danger in the shipyards.

One hundred twenty years ago this month, the Davidson shipyard could have disappeared in smoke and flames except for the extraordinary efforts of local firefighters.

Shortly after noon on April 21, 1896 flames ignited near one of the kilns being operated to treat the wood ribs and quickly spread, engulfing two kilns and then the planing mill itself. According to news accounts, a general fire alarm was sounded and three West Bay City fire companies responded.

Two of the hose companies arrived first to put water on the growing conflagration with the other minutes later, and then two more companies from Bay City responded to assist.

One of the ships under construction, a schooner identified only as “No. 73” had been due for launching and stood on the stocks within 30 feet of the burning mill. The framework of the 285-foot keel caught fire, but firefighters quickly doused the flames limiting the damage.

Officials said the repairs could be made including scraping of the hull and the delayed launch would take place.

An investigation was ordered to determine the exact cause of the fire. Damages were sizeable, estimated to be $20,000.

Catching Up With Chuck

I never met Chuck Berry but, like all kids from the Fifties and Sixties, I knew him through his hit songs. His music was brought to mind after hearing that Berry died at the age of 90 in his Missouri home. His funeral is planned for April 9 in St. Louis. A few years ago, I […]

Over the years we have found all sort of interesting life stories of local residents, although sadly the public only learns of their feats in an obituary notice. That was the case of West Bay City resident Louis Reip, who was most likely the oldest man in the Saginaw Bay region at 105 years, who […]

Shipbuilding had been one of Bay City’s most lucrative industries next to the lumbering business, and local residents certainly have heard the names Davidson, Wheeler, and Defoe. While these were major local shipbuilding magnates, another name of a pioneer some might not recognize is George F. Williams. According to an 1893 biographical sketch in a […]