“THE ONLY GOOD ONE’S A DEAD ONE”

Here’s a comment made by a certain public official:

“I don’t want any of them here. They are a dangerous element. There is no way to determine their loyalty. It makes no different whether he is an American citizen…”

One might think this was a quote from Donald Trump as he frothed at the mouth claiming all of the Muslims must be turned away from our country.

But no. The comment was attributed to Lieutenant General John L. DeWitt, in charge of the military in the western U.S. after the Pearl Harbor attack in 1941.

He was commenting on setting up camps in which to move out all of the Japanese, American citizens or otherwise, from California.

To DeWitt, “a Jap is a Jap,” and he went even further. “…We must worry about the Japanese all the time until he is wiped off the map.”

The sentiment of the American public shifted quickly in his favor, no matter how absurd and shrill the statements and it became an episode in our history that is so baffling as to be unbelievable—yet, to our shame, it happened.

Not only that, but when the troops came to round up the Japanese families from their homes, all they could bring with them was what fit in a suitcase. Their personal property (even for American

citizens) became forfeit and reverted to the government. Bank accounts were seized and the funds turned over to pay for the resettlement. Their personal belongings were stacked up on curbs for scavengers. These American citizens never got their property back nor were they compensated for the seizures.

But it shouldn’t have been surprising. America, despite its welcoming façade, has had a tradition of degrading outsiders because of religion, language, ethnicity, or political beliefs. The roots of our nation depended on the demeaning, swindling, and killing Native Americans who had tried to hold onto their land, or language, or spiritual beliefs.

We’ve heard this line before, right? “The only good injun is a dead injun.”

Plug in any other ethnic group to that statement and it applied to other episodes in our history.

Waves of new immigrants, legal and otherwise, began arriving in the late 19th and early 20th centuries. First came the Irish who were hated because they were Catholic and of the poor economic class. Signs went up in store fronts: “No dogs or Irish allowed.”

My mother was a little girl in Saginaw, Michigan who remembers seeing a sign on a grocer’s door, and asked her mother what it meant. She said she never forgot that, being unable to understand why she was hated because she was Irish.

Some historians have pointed out the numerous riots that broke out across the country against the Irish Catholics (much of it fomented by the Ku Klux Klan and other supremacist groups). Then came hatred of the Italians and Chinese, Eastern Europeans (mainly Polish) and Jews, and lately Hispanics.

The hate was highlighted in 1939 when a ship, the SS St. Louis, with nearly 1,000 Jewish passengers escaping the Nazis, tried to dock in Havana, Cuba while the people were awaiting approval for American visas. The Cuban government refused and the ship sailed to Miami where it again was refused permission to dock. The ship returned to Europe and about half of the passengers disappeared into the Nazi death camps, although some had managed to find asylum in England.

So the anti-Japanese sentiment was not a great departure from America’s past.

Now we have the same feelings expressed again, the emotions whipped up by Donald Trump and his pals because they have discovered a way of advancing themselves politically by quashing the hopes of the terrorized refugees. 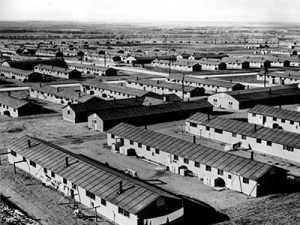 Trump could be using his billions to help humanity, but he has chosen to use his dough to do some play-acting as a presidential candidate. It is a great lark for him to put on this charade for the rest of the political world. He is doing exactly what Ronald Reagan did in 1980—portraying a political figure, a sort-of caricature of a serious person while an odd assortment of underlings actually ran the country after the election.

Trump’s ideas embrace xenophobia as classic Americana. This is reality TV at its ultimate level, a joke on America’s way of life (real life) of which Richie-Rich Trump really knows little.

If Trump got his way with his plans, it would be no surprise if the next step would be “resettling” all American Muslims into “relocation centers,” as part of Homeland Security. It has happened in the past, as we know, including the 1,000-mile death march of Cherokee to desert lands in Oklahoma labeled the Trail of Tears. The Japanese internment was just another in the long list, all with the blessings of many Americans.

Hitler did the same with the Jews and other “undesirables” in Germany that led to the extermination of over 12 million people. Besides Jews, the gas chambers ended the lives of Gypsies, the mentally ill, physically handicapped, homosexuals, Slavs, Russian soldiers and civilians, and an untold number of orphaned children.

These things were always couched in the guise of German national security and so the people went along with it until was too late to stop it which meant a World War was required to put an end to the madness, at least for a while.

Make no mistake. That’s the path we are on right now and the only way off it before it is too late is for true Americans to rise up and denounce and reject any politicians espousing this line of action.

By Andrew Dodson adodson@mlive.com BAY CITY, MI — Tim Younkman, a longtime crime reporter for The Bay City Times whose passion for history and knack to tell a good tale kept him crafting words well after retirement, died Saturday. He was 71. His death was confirmed by his daughter Laicy Madrid. The cause was complications from a […]

The tents have come down

The dispute with Mexico over a “great wall” that will keep pesky foreigner out of our country is only the latest in a historical contest between the two. Are we ready to cede land to Mexico?  We will if a wall is built because one cannot build such a thing on any land but one […]